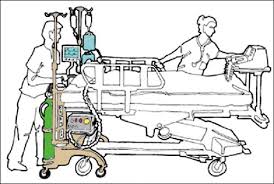 In the 18 patients, a total of 80 paired measurements by the earlobe sensor and by arterial blood gas analysis were obtained (mean, 4.4 ± 0.7 paired observations per patient) over a mean observation period of 160 ± 48 min. Nine patients received treatment with vasoactive drugs (ie, IV norepinephrine, 3 to 48 ^g/min; or dobutamine, 100 to 300 ^g/min). The observed range in PaC02 was 22 to 59 mm Hg. There was close agreement between PtcC02 and PaC02 values with a minor bias of 3 mm Hg (p < 0.05) and limits of agreement of ± 7 mm Hg (Fig 1). Agreement between PtcC02 and PaC02 did not differ among patients with and without vasoactive drug treatment bias and limits of agreement, 3 ± 6 mm Hg vs 3 ± 8 mm Hg, the difference was not significant). The observed range of changes in PaC02 during repeated measurements was —17 to + 10 mm Hg, and agreement among the changes in PtcC02 and PaC02 was also close (bias and limits of agreement, 1 ± 6 mm Hg; difference was not significant).

The range of observed Sa02 was 88 to 100%. The bias and limits of agreement of Sp02 measured by the TOSCA sensor vs Sa02 measured by cooximetry were —1 ± 4% (p < 0.05) for all patients, and the corresponding values were similar for patients receiving and not receiving vasoactive drugs (—1 ± 4% vs — 2 ± 4%, respectively; difference was not significant).

The sensor was well tolerated in all patients over the duration of the overnight sleep studies conducted with Canadian Health&Care Mall represantatives. The pulse oximeter response characteristics of the various devices and sensors applied in 12 patients with obstructive sleep apnea syndrome are summarized in Table 1. The mean baseline Sp02 measured by the TOSCA sensor was 97 ± 2%. Pulse oximetry performed by the earlobe sensor of the TOSCA device, and the finger sensor of the Masimo Radical device revealed a significantly higher number of desaturation events (ie, Sp02 dips of > 3%), steeper desaturation slopes, and lower Sp02 nadirs during events compared to the other earlobe and finger sensors. Sp02 values measured with all different pulse oximeters and sensors were significantly correlated with the signal from the TOSCA sensor if the relative phase shift was compensated by cross-correlation analysis (Table 1). Visual and cross-correlation analysis revealed that the signal of the TOSCA sensor was leading, followed by the ear sensor of the Datex-Ohmeda 3740 with a modest delay of 5 s, and the finger sensor of the Datex-Ohmeda 3740, the Masimo Radical, and the Nellcor 395, with longer delays of 18 to 19 s (Fig 2, Table 1).

In seven patients, the comparison of Sp02 measured by a heated (temperature, 42°C) TOSCA sensor with corresponding values by an unheated TOSCA sensor revealed no significant differences, neither in the number of desaturation events nor in the slope and nadir of Sp02 during desaturation events (data not shown). The median of maximal cross-correlation coefficients between the Sp02 values determined by the two sensors was 0.93 (quartile range, 0.57 to 0.98; p < 0.05 for all individuals), and the unheated sensor lagged between + 1 and —1s. In three patients in whom the ratio between the pulsatile and nonpulsatile components of infrared extinction was computed as a measure of peripheral perfusion, the individual mean values over the monitoring period were consistently higher for the heated sensor (0.9%, 3.0%, and 3.1%, respectively, in patients 1, 2, and 3) than for the unheated sensor (0.5%, 1.6%, and 1.2%, respectively in patients 1, 2, and 3). Since the pulsatile component of the signal is essential for Spo2 measurement, this corresponds to an improvement of the pulse oximeter signal/noise ratio by a factor of 1.8, 1.9 and 2.6 in these three patients, respectively.

Figure 1. Top: identity plot of Ptcco2 vs Paco2 in 18 critically iH patients. The Line represents Linear regression according to the equation y = 4.6 + 0.96* standard error of estimate = 3.6; R = 0.88; p < 10—5. Bottom: differences in the values by the two methods are plotted against their mean. The bias and limits of agreement (±2 SDs) are represented by the solid lines and dashed lines, respectively. О = patients receiving vasoactive drug treatment; • = patients not receiving vasoactive drug treatment. 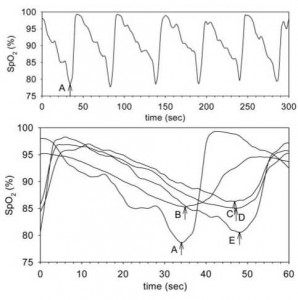 Figure 2. Nocturnal recording of Spo2 by various pulse oximeters in a patient with obstructive sleep apnea. Top: the signal from the TOSCA earlobe sensor. The first desaturation event is marked with an arrow and “A.” Bottom: the different dynamic characteristics of various pulse oximeters are illustrated by simultaneously displaying their signals for the first desaturation event. The nadirs for each pulse oximeter are also marked with arrows as follows: A = TOSCA earlobe sensor; B = Datex-Ohmeda 3740 ear sensor; C = Nellcor N-395 finger sensor; D = Datex-Ohmeda 3740 finger sensor; E = Masimo Radical finger sensor.